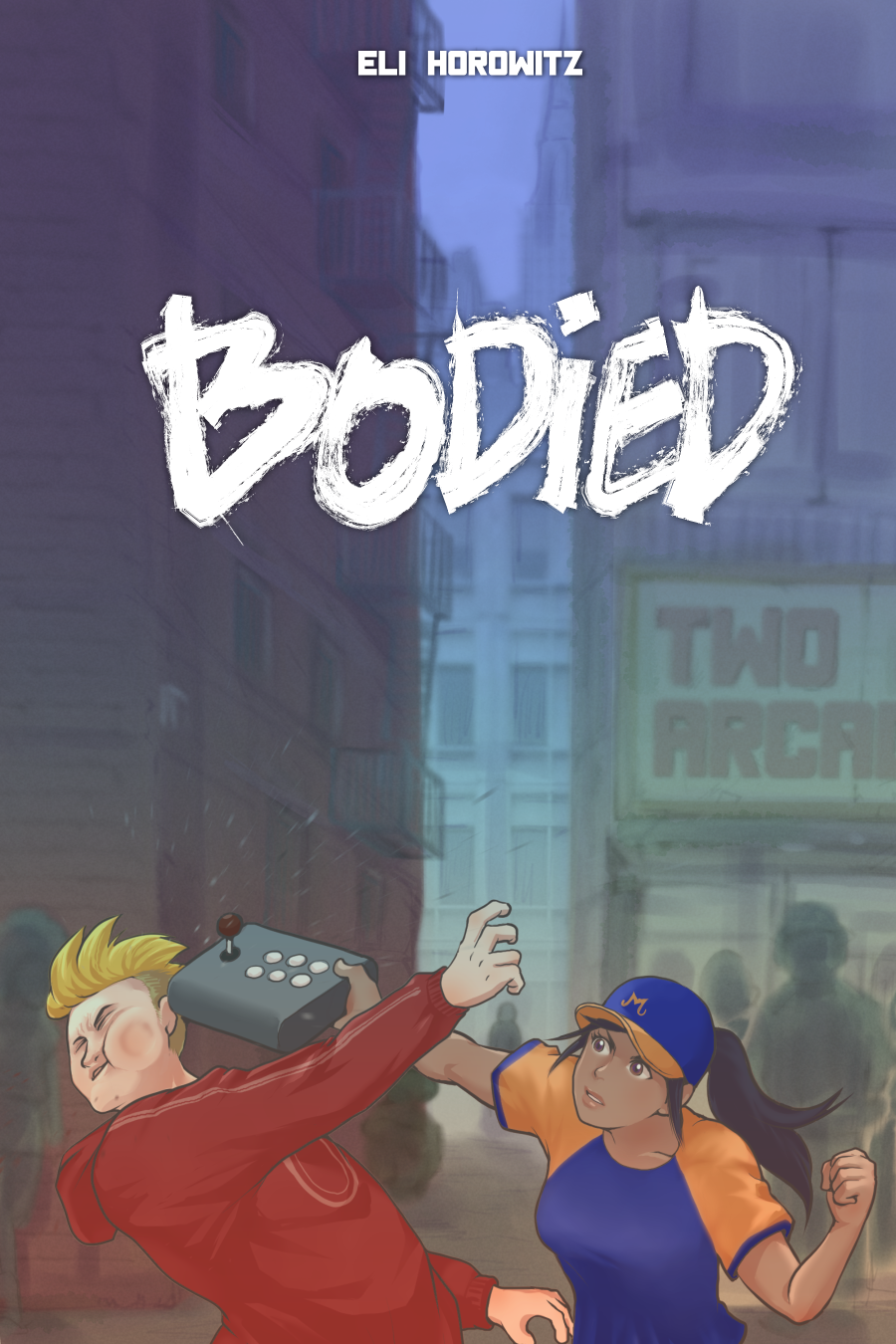 Cover art for the novel Bodied

Maya has a graveyard shift at the post office, a ma whose temper rises even faster than the rent, and all of the million daily headaches of life as a young woman of color in NYC in 2011. Her one saving grace is her local video game arcade, home of New York's feisty, burgeoning fighting game tournament scene - which, if everything goes according to plan, is going to be Maya's new side hustle. But those plans are interrupted after she gets banned for standing up to a trash-talker who goes too far.

To get back into the arcade and fight for her independence and respect, Maya will partner with a team of up-and-coming players and learn to defeat not just her opponents but also her circumstances and her own worst instincts. Along the way, she'll learn that people aren't always what they seem, that there's more than one way for her to hold her own in the male-dominated FGC, and that finding your place in the world isn't always enough if you can't also find your time.

Bodied takes inspiration from old-school rap and R&B, pop anime, Chinese wuxia cinema, ancient philosophy, and the real-life history of America and the American FGC. Put it all together and you get a unique coming-of-age story with sneaky literary chops, a modern mashup between The Brief, Wondrous Life of Oscar Wao and A League of Their Own.

Come to Kobold Kody’s Frontier Exposition and Tonic Show and you’ll see pyromancers, snake-men, the World’s Tallest Halfling, and much more. But not everything is what it seems. Jorg, the Show’s dragon-tamer, carries a shameful secret. The man advertised as Glyn the Barbarian is anything but. And then there is Andra.

In her youth, Andra met the great, vain poet-mage Pol, who cursed her to foresee tragedies that no one would believe until it was too late. The curse drove her from her home town and into the Empire of the Sun’s finest traveling circus, home to Jorg, Glyn, Etain the contortionist, and a motley host of other victims and rogues. Yet Andra knows that their years of travel together are coming to an end. In fact, she’s foreseen it: soon she will encounter Pol again, and their meeting will be the end of the Show – and quite possibly the end of Andra as well.

Drawing on everything from ancient Greek mythology to the legends of the Wild West, The Final Days of Kobold Kody's Frontier Exposition and Tonic Show is an unexpected parable for our socioeconomic age. A spellbinding and powerful fantasy set in a world that’s at once magical and recognizable, it updates old myths for the modern era - and, in doing so, creates something entirely new.

A Home in the Clouds (work in progress)

Zach Miller works full-time as a landscaper. Zach is also homeless. As skyrocketing rents and runaway gentrification change Zach's home of Pittsburgh before his eyes, he meets Olivia Lin, a project manager who left San Francisco looking for a lower cost of living. Although opposites in many ways, an attraction flowers between them. But she doesn't know that he sleeps in empty Airbnbs and in his car, and he doesn't know if he can love and trust one of the people who are rewarded by the same system that's been pushing him further and further out on the margins.

Set in the near future against the backdrop of runaway capitalism and a warming planet, A Home in the Clouds is a meditation on what "home" means to those of us living in the early twenty-first century.

My story "Work Hard. Have Fun. Make History." was included in the Spring 2021 edition of Mobius: The Journal of Social Change. A rethinking of Greek myth in the context of 21st-century capitalism, the story is free to read here.